Converse 8 has been released

I’m happy to announce that, after almost a year of development, the latest major version of Converse has been released.

Converse is an XMPP chat client, written in JavaScript, that runs in your web browser. It can be used as a single application, or integrated into an existing website and works with any standards-conforming XMPP server.

If you’d like to try out Converse, you can head over to https://conversejs.org (to use it with multiple overlayed chat boxes) or https://conversejs.org/fullscreen.html to use it as a fullpage app with one chat visible at a time. If you need to register an account, you can find lists of public servers at jabber.at, 404.city or xmpp.net.

Converse 8 finally adds support for this form of text-styling.

Here’s the output of one of the styling tests, showing how the different styling directives are rendered: 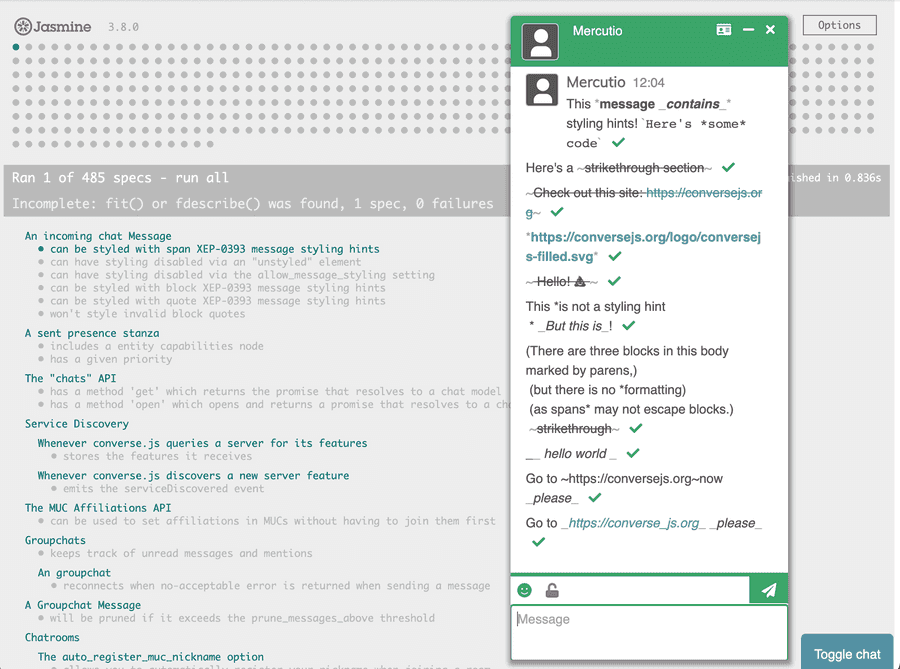 This means that sent files (like images, or PDFs), can be end-to-end encrypted and then, when received on the other end, decrypted and shown in the chat.

XEP-0437 Room Activity Indicators (RAI) is a more obscure XMPP extension that deals with some of the drawbacks of the presence-based model of XMPP’s multi-user chat (MUC) specification.

The goal of RAI, is to let the chat client leave a MUC when it’s not longer visible, while still receiving a notification when new messages have been sent in that room.

In collaboration with Matthew Wild and Seve Ferrer de la Peñita, I also wrote (and added support for) a complementary XEP called XEP-0452 MUC mention notifications which informs you when you’ve been mentioned in a MUC that you’re not currently joined to.

Converse will automatically subscribe for activity and mention indicators as soon as the hidden flag on a chat room is enabled.

The only XMPP server that I’m aware of that currently supports these XEPs is Prosody, via mod_muc_rai and mod_muc_mention_notifications.

Converse can now render URL previews (aka “unfurls”), if it receives a message with structured metadata in Open Graph Protocol (OGP) format for a particular URL.

Most websites use OGP (one notable exception being Twitter) to provide unfurl metadata.

Prosody’s mod_ogp can be used to send this metadata to Converse, and to render Tweet previews mod_tweet_data can be used.

Below is a screenshot showing the URL preview of a Youtube URL: 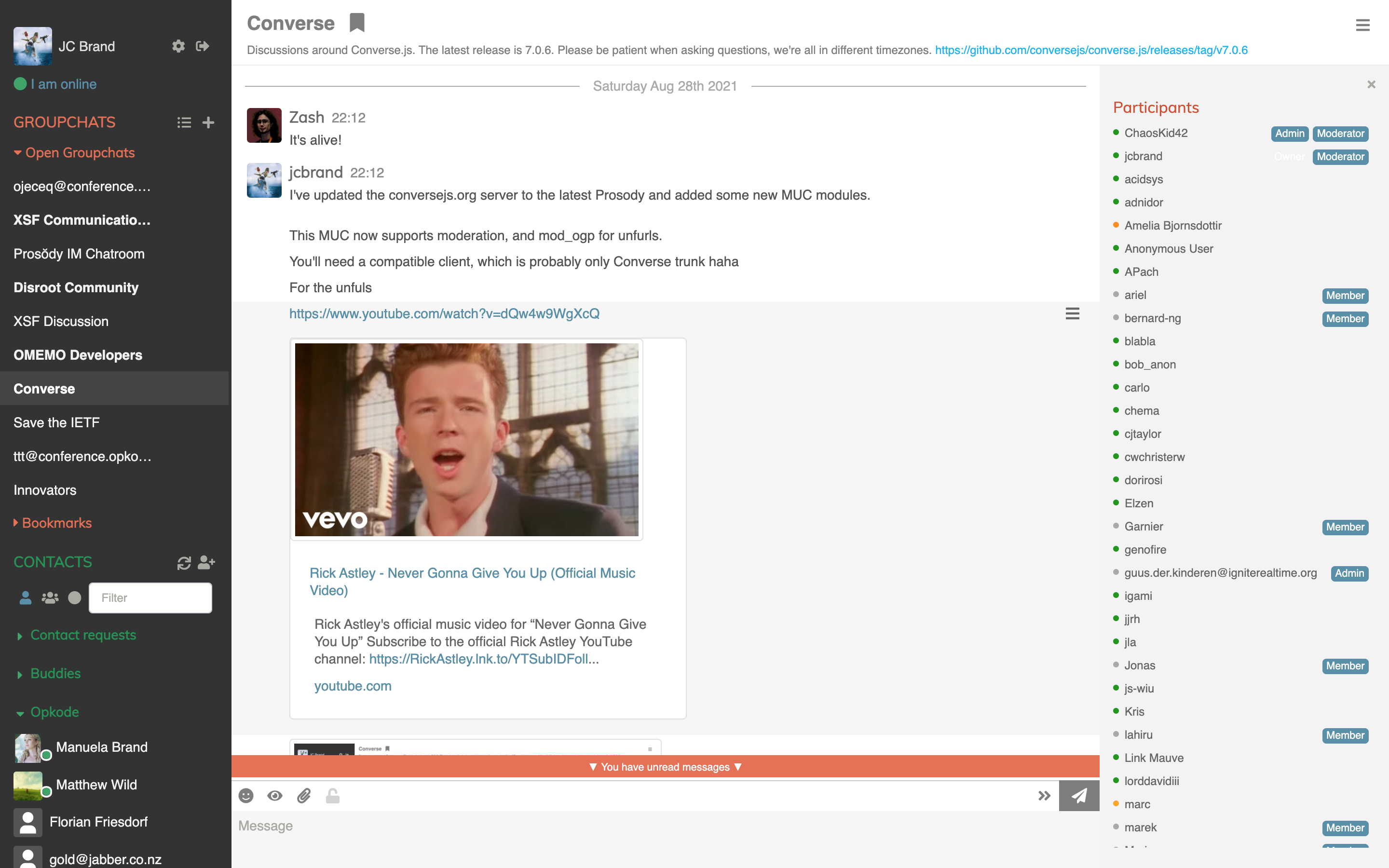 Converse now lets you pause animated GIF images. When an animated GIF is received, it’s passed to a converse-gif web component, which renders it with a <canvas> element.

I’m considering releasing this code as a separate open source project, since it might be useful to others outside of Converse as well.

The layout of the project directories and source files has been changed. The plugins used to be in single (quite large) files, but now they’re broken up into multiple smaller files and moved into their own folders. Tests and styles are now also broken up and put into the same plugin folders.

More can be done here, especially concerning exracting plugin-specific CSS and moving it to the relevant plugin folders, but we’ve made a very good start.

IndexedDB is the new storage mechanism

IndexedDB is now used as the default storage mechanism. This solves the problem of users running into the storage limit of localStorage.

IndexedDB has no storage limit, and it’s also asynchronous, so it doesn’t block rendering of the UI. I started working on adding IndexedDB quite a while back, but ran into performance issues that were difficult to solve. Eventually I managed to find a solution, by using a utility method called mergebounce, which I originally wrote for a different use-case. You can read about that solution in my previous blogpost

Previously Converse was using Backbone Views to render the UI, which reflects the age of this project. Converse was started in 2012, when Backbone was still widely used and many of the big JS projects and language features that people rely on today didn’t exist yet.

Around 2016, Backbone started to really stagnate I realized we’ll have to eventually get rid of it.

I decided it would be preferable to gradually “evolve” the codebase, instead of doing a large rewrite with a newer framework, which could hold up feature development, leave existing users and integrators in the lurch and potentially cause second system syndrome.

Over the years, I chipped away at the problem (e.g. removing jQuery, replacing undescore with lodash, adding a virtual DOM to Backbone Views), spent a lot of time on modernizing the code (e.g. promises instead of callbacks) and on introducing new tools. We were on the JavaScript treadmill, incurring development costs that projects with more mature languages don’t have.

Getting rid of Backbone however proved elusive and difficult. I kept an eye on the developing web component standards, hoping that they might provide a way forward.

Another goal is to make sure Converse can be integrated into any website. Web components are framework agnostic, and because they’re actual DOM elements, they can be used with existing JavaScript frameworks.

Lit also allowed me to start rewriting and updating the code piecemeal, fitting the desire to evolve the code instead of rewriting it.

lit-html, Lit’s templating library, uses tagged template literals to render to the DOM, which allows it to update only those parts of the DOM that have changed. It doesn’t require a virtual DOM and is blazing fast.

lit-html provided a way for us to keep using separate templates files, while providing a faster and superior templating language. So the first thing I did was to update all the templates to use lit-html.

Once that was done, I started rewriting Backbone views into web components using lit-element.

Frustrated with the lack of updates to Backbone, I also created a fork called Skeletor, so that I could start modernizing it.

In Skeletor I created an ElementView class, which was almost exactly like a Backbone View, but with the added benefit of also being a web component.

Having the ElementView made it easier to turn even more of our existing views into web components, without rewriting lots of code. Over time, I could then refactor these new web component views into Lit components.

This is how I was able to gradually update the UI layer of Converse to use web components without causing significant disruption.

Converse now renders much faster than before, mainly due to the usage of Lit. The easiest way to see this is by running the tests.

A big thanks goes out to everyone who contributed to this release, from development to bug reports, ticket triage, pull requests and translations.

A toast to messaging freedom!