2018 Gulaschprogrammiernacht and organizing sprints for XMPP

Recently I attended the Gulaschprogrammiernacht for the first time.

It’s a hacker/maker event in the Zentrum für Kunst und Medien (Centre for Arts and Media) in Karlsruhe, Germany.

AFAIK it’s organized by the local chapter of the infamous Chaos Computer Club.

I heard about it from Daniel Gultsch on Twitter. It sounded like fun, so I decided to attend and spend the time adding OMEMO support to Converse.

Guus der Kinderen and I intended to organize an XMPP sprint for that weekend in Düsseldorf, but we were cutting it a bit fine with the organization, so I hoped that we could just shift the whole sprint to GPN.

Unfortunately Guus couldn’t attend, but Daniel and Maxime Buquet (pep) did and I spent most of the event hanging out with them and working on XMPP-related stuff. The developers behind the Dino XMPP client also attended and hung out with us for a while and there was someone working on writing an XMPP connector for Empathy in C++. 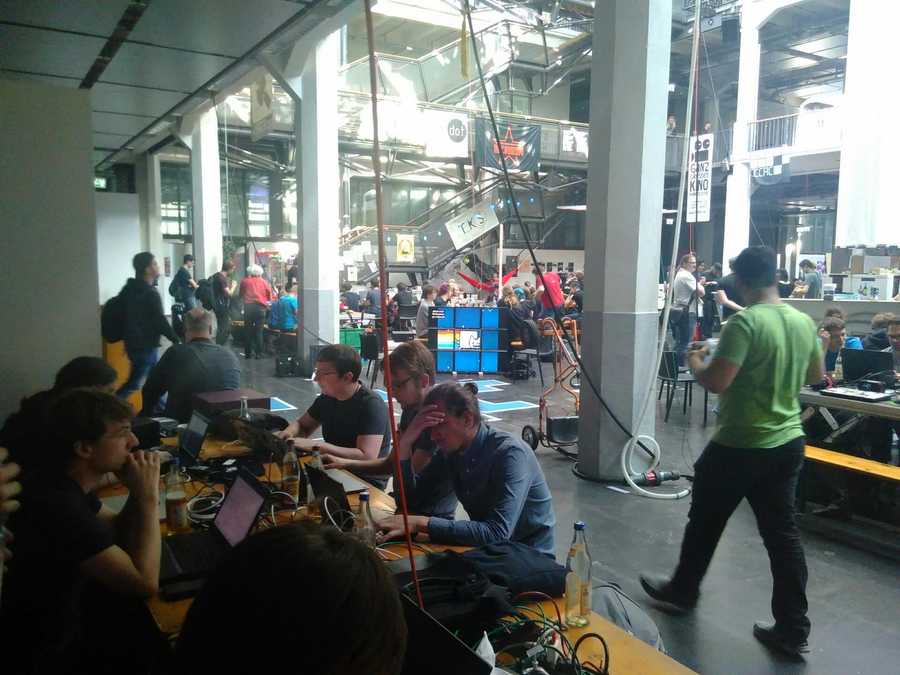 Maxime worked on adding OMEMO support, to Poezio, and Daniel provided us with know-how and moral support. Daniel worked mainly on the Conversations Push Proxy.

We had some discussions around the value of holding regular sprints and I told them about my experience with sprints in the Plone community.

The Plone community regulary organizes sprints and they’ve been invaluable in getting difficult work done that no single company could or would sponsor internally. To me it’s a beautiful example of what’s been termed Commons-based peer production.

The non-profit Plone foundation provides funding and an official seal of approval to these sprints, and usually a sprint has a particular focus (such as adding Python3 support). Sprints can range from 3 people to 30 or more.

In both cases however there is a single commons which community members have an incentive to maintain and improve as they build their businesses around it.

Another difference is between the Plone Foundation and the XMPP Standards Foundation. The XSF, for better or worse, interprets its role and function fairly strictly as being a standards organisation primarily focused on standardising extensions to XMPP, and less on community building or supporting software development.

Despite these differences, I still consider sprints a great way to foster community and to improve the extent and quality of XMPP-related software and documentation.

There is an interesting dynamic between cooperation and competition in both the Plone and XMPP communities. Participants compete with one another but they also have the shared goal of maintaining and growing a healthy software ecosystem.

Maxime was particularly excited by our discussion and very quickly put word into action by planning and announcing an XMPP sprint in Cambridge, UK in August.

There’s still time to vote on the date of the sprint and to suggest topics.

Hopefully this will be first of many more sprints and communit events.