I recently read a fascinating profile about a guy who made about 50 000 edits to Wikipedia to correct a relatively obscure grammatical mistake. The mistake of using “comprised of” when one should be using “composed of” or “consists of”. He is the ultimate wikignome. A name given to people who spend most of their time on the site making small corrections and fixes.

This reminded me of a grammatical mistake that programmers frequently make. I notice it in source code, on IRC, in mailing lists and in documentation.

Here are a few examples from actual code, which I found by using “grep”:

What is the grammatical mistake in all these examples? 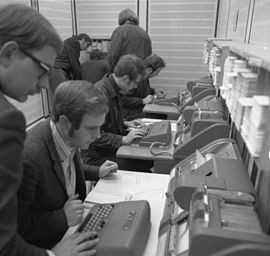 In the above examples, they are used as verbs but spelled as nouns.

EDIT: Some readers misunderstood the point and thought I implied that there must always be a clause between the two words in the verb. This is not true. The point is that they are written separately.

For Example: “Please set up the server for me:.

When used as an adjective, setup also stays one word:

This mistake happens mostly with setup, however here are similar words which also often get used incorrectly:

UPDATE: Here are some more:

Another interesting case is “maybe”. It can be used as an adverb (one word), noun (one word) and verb (two words, a modal verb “may” and the main verb “be”):

We don’t say load it down. We say download it.

That’s different. In the first category of compound nouns (setup, teardown, handover), the part of the word that denotes the act is first, followed by an adverb such as up, down, over or under:

In the second category, the acting word is second (load, grade, take, throw) and the first word denotes position:

Other examples of the second category are:

These do not get split up.

I hope I made things clear and that programmers will now “undertake” to “clean up” their code by removing these grammatical mistakes. ;)

EDIT: I've thought about this some more, especially in light of some of the comments provided by readers. I can see how using the word "setup" as a type of shorthand for "set up", to avoid unnecessary underscores or capitals, can be useful and valid. If you undersand the distinction and prefer writing it as one word, then go for it. I think however what's important is for people to at least understand that it's an exception and not the general rule outside of computer science.